A Bopwork Orange is episode 26a of Fanboy and Chum Chum season 1.

Boog has bopped his customers one time too many, and now he's in danger of getting fired. Fanboy and Chum Chum guide him through several trials to try and get Boog to stop bopping.

Lenny is sleeping in the Frosty Mart, then Fanboy, Chum Chum, Chris Chuggy, and Yo storm in for free lollipops, but Boog trick them, he meant LolliBops. He starts bopping them, until Agent Johnson comes in threatening to fire Boog if he bops another person. At first Boog doesn't care, until he hears Chimp Chomp has to stay at the Frosty Mart. So Fanboy and Chum Chum volunteer to help Boog with a dog collar to zap him if he bops, and it takes 720 trials. So He has a goodbye with Chimp Chomp... and notices that the joysticks are missing, Fanboy and Chum Chum used them for the remote. But Boog doesn't bop them. And Boog is rehired, unfired and proceeeds to zap at Fanboy and Chum Chum. (he got this power from being zapped by the collar too many times)

For a full transcript of A Bopwork Orange, click here. 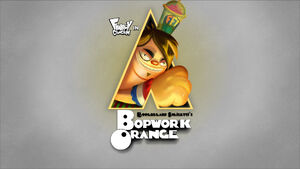 Dyana Liu as Yo

Retrieved from "https://fbandcc.fandom.com/wiki/A_Bopwork_Orange?oldid=54722"
Community content is available under CC-BY-SA unless otherwise noted.