Cold War is episode 16a of Fanboy and Chum Chum season 1.

After Fanboy and Chum Chum get sick from staying out in the rain too long, they begin to fight over each other. They even argue over Kyle, deeming him as his "best friend", eventually causing him to be aggravated with their sickness due to their games having random rules.

A big rain starts to pour, spoiling the plans for Yo, Chuggy, Nancy and Duke, who go home. Fanboy and Chum Chum like it and play, singing a song. This is wrong, however, as they start to sneeze. This is a hint that due to wearing no rain coat, they are getting sick in the rain and must go home immediately.

Chum Chum is upset and thinks of writing Mother Nature a letter, but Fanboy snaps him out because they are together, as they're best friends. Agreeing, Chum Chum gets the phone, stating they'd better call in sick. Fanboy calls Lenny, telling him they can't be there for their "usual madcap hi jinks and tom foolery", because they're sick. Lenny gets excited and tells them to stay away as long as they'd like, longer even. Fanboy then sees nachos on a plate in front of him and grabs them by reaching across the splitscreen, thus, ending the phone call.

Fanboy states they're now "no work and all play", and decides he and Chum Chum reach the bottom of a box. It takes them only ten seconds to do it, letting Fanboy to state that the bottom really sneaks up on them. Since there's nothing else to do, they decide to watch the TV.

Chum Chum can't use the remote to turn the TV on as its batteries are dead, and states only one of them has to go up and turn it on. Chum Chum decides to do it himself as Fanboy says it's too risky for him. However, Chum Chum begins to get weak as he proceeds, leaving Fanboy to believe in suffering from fever blindness. Chum Chum decides to not do the favor, as his record's clear on the matter. This leads them to say that they didn't want to watch TV anyway, but Fanboy sneezes as Chum Chum gets on the couch.

Chum Chum says he has to breathe the air and they face away from each other for a moment. Chum Chum sneezes, and Fanboy asks if he heard of a tissue. Chum Chum uses one just in time to see Fanboy sneeze on him. He says he did it on purpose, but Fanboy says he didn't, and if he did, he would do something else. He sneezes in slow motion all over Chum Chum, which is the final blow to him, and the boys begin to fight each other which makes them not be friends. The fight was soon interrupted by the doorbell, surprising them, as they didn't expect someone.

They open the door to reveal Kyle standing there (thunder goes off as they say his name), and wonder why he came. Kyle explains he wouldn't be here unless in an emergency, but he was caught in the rain which is an acid to wizards, and his cape evaporates as a result. While he is explaining this, F&C look at each other confused, as they never heard of this before. Before Kyle could say more, Fanboy and Chum Chum start asking him to play with him, leading Kyle stating he was not here to play. F&C let him know he's here because he's their best friend, but they growl at each other due to the fact they said it at once, and they are fighting each other.

Kyle is touched by the fact he is their best friend, as he always assumed they despised him as much as he despise them. Because Fanboy and Chum Chum are fighting, he is suprised as he never had anyone want to play with him before. This leads Kyle to decide who gets the privilege of being his best friend and playing with him, but is grossed out due to Fanboy and Chum Chum are the only choices. Fanboy decides to get rid of Chum Chum by releasing the trap door below him causing him to fall into it. Kyle thinks it does simplify things.

After Fanboy lounges on his bed with Kyle for a moment, he tries to get him to play a game, either Dead Arm, Charlie Horse, or Eyesies Pokesies. Kyle would rather play a board game, and Fanboy opens a trunk under his bed which turns out to be a huge game chest. He goes through a selection of board games: Killer Robot Frenzy, Zombie Attack, Violence Fight and Violence Fight 2 (now with more violence). Kyle spies a more girly game, Mr. Unicorn's Teddy Bear Dress-Up Fashion Show, but Fanboy says he and Chum Chum melted all the pieces to put them out of their lameness. Kyle spies another game, Chinese Checkers, as it may get a bit high-spirited. After seeing the spice of some sort of orient feature, he changes his mind and chooses Domestic Checkers instead.

After unpacking the game, Kyle decides to be black and sets up the pieces. Fanboy worries as Chum Chum lets him choose black because it reminds him of ninjas, but because Kyle's his best friend now he has to let him be black. During the game, right after Kyle jumps one of Fanboy's pieces, Fanboy starts slamming and hitting the game board, causing all the pieces to go all over the place. Fanboy states that he's playing, because they have to make the "Evil Energy Disks jump into the black hole". Kyle is horrified at the fact that Fanboy is besmirching such a noble game, leading Fanboy to ask how he plays "Death Checkers". Kyle decides he chose the wrong best friend and quits the game, leaving Fanboy shocked. Chum Chum comes up in the elevator and calls him his best friend now. Right before they go down the elevator, Chum Chum states Fanboy doesn't deserve Kyle.

Kyle is on the couch with Chum Chum, about to play action figures. Chum Chum says the rules are simple: just move them around and make them fight. Kyle thinks it's low brow and decides to be the white ninja while Chum Chum is the red one. After a short fighting round, Kyle claims he wrong, but Chum Chum says his ninja "moved", as his ninja is "quick". His ninja then chops Kyle's arm off, leaving Kyle to let him "feel the force of both his parry and hid thrust" and attacks Chum Chum's ninja again. After "cutting Chum Chum to the quick" Kyle does a quick victory dance, but Chum Chum states he bounced off his "force field". Kyle complains that ninjas don't have force fields, and Chum Chum has his ninja use its "Sonic Ray" to "pretzel-ize" Kyle's ninja's legs. After his ninja's legs get twisted, Fanboy complains about the Sonic Turbo Ninja Chum Chum has and asks him to use his "Mystical Throwing Cow". He does so, and the other arm of Kyle's ninja falls off.

Kyle thinks Chum Chum is going loosy-goosy with the rules, and steals Chum Chum's ninja. He jumps on it, bangs it on the door, and rips it in half, giving him a taste of his own medicine. After fainting to the floor, Chum Chum says he missed him again, and Fanboy states his ninja's head will explode, and it does. Though it seemed like fun to Fanboy and Chum Chum, the random rules to both the ninjas and the board game is the final blow to Kyle, who goes on a long-winded tantrum as he yells to F&C about their made-up rules and airborne livestock. He ends the tantrum by saying "I CALL SHENANIGANS!", which has a trigger word for a game of F&C.

After hearing the word "Shenanigans" which is the trigger word, this causes red lights to flash and stereos and a sign to fall into place. Balloons also drop from the celing, as Fanboy announces that the game Shenanigans has been called. Chum Chum says that Shenanigans is the best game they've got, and thank Kyle for shouting the trigger word. They get into their shenanigan helmets, and they start the game.

First, Chum Chum bangs on one of the two oversized boxes, letting four small clones each of himself and Fanboy come out. They chase Kyle around the Fanlair, letting him run into a stereo, getting blasted by techno music. Kyle runs to the window, but the clones catch him and carry him to the next round, the Pancake Fight. A red hot huckleberry pie hits Kyle in the face as the clones let him go and a bear runs away from a life-sized ketchup bottle. Fanboy states it was Kyle's first try and Chum Chum gives him a sky-high rocket ride. This causes Kyle to fly all over the Fanlair and land in the bathroom, only to come out with a toilet stuck to his head.

After Kyle manages to get the toilet off, he announces he refuses to spend one more moment in the Fanlair, and wants them to let him out. Fanboy announces that Kyle calls outsies, letting another alarm to go off. As a result, Kyle gets tossed out of the Fanlair through the roof, and he lands on the moon.

Back in the Fanlair, as the clones agree over what a great game they had, Chum Chum agrees that it was super-fun. He rubs his nose, revealing he's no longer sick, or sick of Fanboy anymore, and Fanboy is the same. It was all because of their game, which is an enduring gift to them. They look at each other for a few moments, as they are best friends themselves again.

As the boys look out the window into the rainy night, Fanboy decides they promise to never do whatever got them mad at each other in the first place ever again, whatever that was, and Chum Chum says it's a deal and asks if they go play in the rain. Fanboy agrees and they walk out, as Chum Chum read his mind and he is indeed, his best friend.

For a full transcript of Cold War, click here. 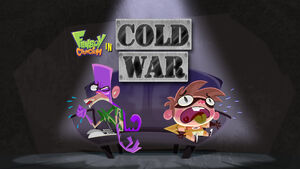 Retrieved from "https://fbandcc.fandom.com/wiki/Cold_War?oldid=55491"
Community content is available under CC-BY-SA unless otherwise noted.