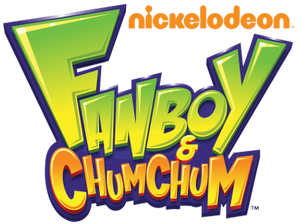 A wiki about Fanboy and Chum Chum that anyone can edit. There are 720 articles since this wiki was founded on January 2011.

Fanboy and Chum Chum is an American CGI animated television series produced by Frederator Studios. It is based on a first episode/short from Fredreator's Random! Cartoons called Fanboy. The series was created by Eric Robles.

The series centers around Fanboy and Chum Chum, a pair of hyperactive, odd, energetic, and slow-witted best friends enthusiastically obsessed with superhero comics, particularly those featuring their favorite superhero Man-Arctica, who also apparently seems to double as a holiday figurehead parodying Santa Claus within the series. Many episodes are based around comical parodies of famous films or contain countless references to popular culture, chronicling Fanboy and Chum Chum's exaggerated, surreal daily experiences and misadventures relating to dilemmas in which they have entangled themselves or the surrounding characters' utter infuriation with their irritating antics.

The series was first broadcast October 12, 2009 on Nickelodeon as a preview, then officially premiered on November 6, 2009 after SpongeBob's Truth or Square. The show has total of 52 episodes.

Glitch Techs is a Netflix show that was premiered on February 21, 2020. Created by Dan Milano (Greg the Bunny, Warren the Ape) and Fanboy and Chum Chum creator himself, Eric Robles.

It's about two teens, Hector "Five" Nieves and Miko Kubota, recruited to battle video-game monsters that have found their way into the real world.

Not sure where to start?

The Community Portal is a great place to learn about the wiki. It contains information for newcomers and regular members alike:

Go to these sites for info or for help with your own wiki!

Retrieved from "https://fbandcc.fandom.com/wiki/Main_Page?oldid=52871"
Community content is available under CC-BY-SA unless otherwise noted.