Start a Wiki
Night Morning is the eleventh episode of Fanboy & Chum Chum season one. It was the 2009 "holiday special" of the show.

After seeing Chum Chum sneak out late at night, Fanboy learns he was enjoying a holiday called "Night Morning", where he does things he can't do between morning and night. Fanboy invites everyone over to spend Night Morning with them, but the activities don't seem as fun to them as Fanboy and Chum Chum do.

Fanboy and Chum Chum have tucked each other in bed late one night. Hours after Fanboy falls asleep, he notices Chum Chum isn't in bed right when he was about to re-tuck him. Unbeknownst to Fanboy, Chum Chum was out all night, and when he returns, he notices Fanboy isn't in bed and wonders why he is awake. Fanboy wants to know why Chum Chum was awake, and he explains that he was enjoying "Night Morning", the time between night to morning where you can do the things you can't do between morning to night. Fanboy repeatedly asks Chum Chum what he can do during that time, and Chum Chum invites him to join him. Excited, Fanboy accepts.

Fanboy tucks himself into bed, and so does Chum Chum. But their sleep does not last long, as the alarm clock strikes midnight seconds after falling asleep. Right when Fanboy wakes up, everyone from the school shows up, showing that Fanboy invited everyone. Chum Chum is uncertain, as Night Morning might not be for everyone. Fanboy ignores him, stating he discovered something sacred, and takes one dollar from anyone who comes over. Then the party begins.

In the kitchen, Chum Chum explains to Fanboy that he usually starts out with a bowl of cereal, and grabs a box of Ice Monster Crunch Crunch. Just before eating, Michael takes his picture and Fanboy begins to pass out protective splash gear which no one wants. The crowd eagerly awaits what Chum Chum will do with the cereal, but all he does is eat it, which makes everyone bored. Then when he gets to the last bite, everyone begins to get eager. But Chum Chum spills the cereal box, making everyone upset. Francine takes her dollar from Fanboy and leaves, due to stating that it's boring instead of exciting.

The party continues to the living room, where Chum Chum says he usually watches his favorite show next. Fanboy offers to turn the TV on for Chum Chum, but to everyone's annoyance (except Fanboy), he is only imagining the show. Lupe thinks he is crazy like his uncle who married a chicken. Fanboy tries to get everyone in the mood by asking if they just love Night Morning, but to no avail. As a result, Kyle swipes not one dollar but two, and Lupe takes her dollar back as well. Both leave, and Fanboy tells everyone it's their loss, but it will get wild soon. At that moment, Chum Chum says he has a shirt to iron, which bores everyone.

Throughout the night, Chum Chum continues doing various normal activities, such as folding, sharpening pencils, cleaning his ears and knitting. Fanboy enjoys it, but not everyone else, who take a dollar back and leave, one after another.

Now only Yo and Chuggy remain, and Chum Chum explains this part of the night is where Man-Arctica comes over to invite him to protect the universe with him. Fanboy begins to get super excited, so do Yo and Chuggy. But the excitement is cut short when Chum Chum lays out cookies and milk, which is what Man-Arctica gets due to getting hungry from flying around the world delivering toys to all the good boys and girls. Yo flatly quotes: "Isn't that Santa Clause?" with Chum Chum responding "Who?" and she and Chuggy immediately take their dollars back and leave, and Fanboy and Chum Chum are alone.

After they leave, Chum Chum remarks it's the night Man-Arctica finally comes, implying that he never came before. Fanboy excitedly gets ready for Man-Arctica's debut appearance by getting out a chair and waiting for him to arrive, but instantly falls asleep while doing so.

Chum Chum notices a mixup in the snack: it's not cookies and milk, it's milk and cookies. Just after he makes the switch, Man-Arctica arrives and Chum Chum tries to wake Fanboy up. Tired, Fanboy refuses, as Night Morning was too intense and he's worn out. Just before he and Man-Arctica leave, they decide to take Fanboy with him with Man-Arctica asking if he's cool first and Chum Chum nods then they fist bump their hands. Seconds after "breaking arctic wind", Man-Arctica says he has to deliver presents to alot of good boys and girls, and Chum Chum asks him if he knows Santa Clause with Man-Arctica responding "Who?". He adds that Fanboy will love this when he wakes up, and they fly away. The episode ends as Hank receives a present from Man-Arctica along with his reaction one last time.

For a full transcript of Night Morning, click here. 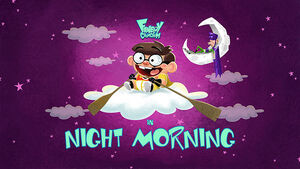 SpongeBob SquarePants - The way Fanboy falls asleep on Chum Chum while waiting for Man-Arctica, it might be similar to how the elderly SpongeBob falls asleep on his future kid in the episode "The Great Patty Caper".

The Wiggles - Another way that Fanboy falls asleep easily is similar to the purple wiggles Jeff Fatt (1991-2012) and Lachy Gillespie (2013-present) in the Australian preschool band.

Retrieved from "https://fbandcc.fandom.com/wiki/Night_Morning?oldid=50538"
Community content is available under CC-BY-SA unless otherwise noted.