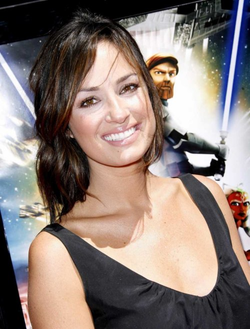 She was born in New York City, and currently lives in California. She has a daughter who was born in 2008.

Futterman has provided her voice in many cartoons, including CatDog, Hey Arnold!, Mike, Lu & Og, Xyber 9, The Zula Patrol, ChalkZone, Kim Possible, Avatar: The Last Airbender, Handy Manny, Fanboy and Chum Chum, Teen Titans Go! Sanjay and Craig, Tenkai Knights, and The Loud House. She has performed recurring roles on animated adventure and superhero series such as G.I. Joe: Renegades, Batman: The Brave and the Bold, and The Avengers: Earth's Mightiest Heroes.

Futterman is the voice of Asajj Ventress in the 2008 animated film The Clone Wars and its subsequent TV series as well as several related video games. She has provided the voice for Sy Snootles among other characters. She attended her first Star Wars Weekend on the last weekend of June 2012. She was on the show Behind the Force along with her cast members Ashley Eckstein and James Arnold Taylor with Supervising Director Dave Filoni. Futterman also voices Sticks the Jungle Badger in the Sonic Boom TV series and its associated video games, Sonic Boom: Shattered Crystal and Sonic Boom: Rise of Lyric.

Futterman performed the vocals "Give it to me, baby" in The Offspring hit single "Pretty Fly (For a White Guy)" and cameo backup vocals "Careless Whisper" on Kids Incorporated. Some of Futterman's animated characters sing songs within the soundtrack of a show, as well. She sings the theme song of My Gym Partner's A Monkey in-character as Adam Lyon, Sandy of Bubble Guppies sang a song about coconut water several times in the episode she was featured in, Kip Ling of Histeria! usually only shows up in the songs on the show, Chum Chum of Fanboy & Chum Chum sings many times (Futterman is also often accompanied on lead vocals during the FB&CC songs by David Hornsby, who voices Fanboy), Stretch and Squeeze of Handy Manny sing two songs called "We Work Together" and "Hop Up, Jump In" alongside the other tools, and Luna Loud of The Loud House is a musician, and frequently sings.

Retrieved from "https://fbandcc.fandom.com/wiki/Nika_Futterman?oldid=49107"
Community content is available under CC-BY-SA unless otherwise noted.