The Tell-Tale Toy is episode 15b of Fanboy and Chum Chum season 1.

Chum Chum gets an Ultra-Ninja in the mail and due to Fanboy's constant breaks of his other toys, he won't let Fanboy play with it. And when Chum Chum leaves for the hospital overnight to get his arm bone set, Fanboy ends up playing with the Ultra-Ninja which causes it to break, so he tries not to tell Chum Chum he broke it when he returns.

﻿Fanboy and Chum Chum are excited when something new comes in the mail: an Ultra-Ninja! Chum Chum is excited to get it, and Fanboy wants to play with it, but Chum Chum says no, as he always breaks things. After a flashback to when the boys were babies and Fanboy broke nearly anything, Fanboy promises he'll be careful and accidently stands on Chum Chum's arm, extending it. Chum Chum leaves for the night to get his arm fixed, and Fanboy tries not to play with the Ultra-Ninja, but couldn't resist it and accidently breaks it. After screaming several times all night and a nightmare of a giant Chum Chum getting mad at him, Fanboy tries to fix it, but has no luck. When Chum Chum returns, he tries not to tell him, but after a while, he decides to bite the bullet and tell him. But Chum Chum asks him where the box is, and it's okay, and Fanboy is thankful when Chum Chum decided to give him the Ultra-Ninja and he only wanted the box.

For a full transcript of The Tell-Tale Toy, click here. 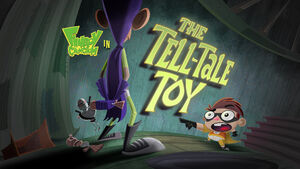 Retrieved from "https://fbandcc.fandom.com/wiki/The_Tell-Tale_Toy?oldid=53493"
Community content is available under CC-BY-SA unless otherwise noted.