There Will Be Shrieks is episode 10 from Fanboy and Chum Chum season 2. It's only Halloween Special of the show.

Halloween has come to town, and Fanboy and Chum Chum can't wait to go trick-or-treating that night. When they meet a pumpkin monster, Mr. Trick, they end up tasting a treat that causes them to lose their taste sense so they'll no longer taste candy. Now, the boys have to grab 1,000 screams for Mr. Trick, otherwise they'll never have their taste again.

Halloween approaches Galaxy Hills as a narrator introduces the episode. An excited Fanboy and Chum Chum can't wait to go trick-or-treating, but first, they need costumes. Fanboy is Frankenstein's monster, and Chum Chum first suggests being Fanboy (a costume he wore last year), but that's totally NOT his costume, so he goes as a werewolf. Fanboy and Chum Chum then grab their pails, and head out.


First stop: the school, where Mr. Mufflin lives. However, they learn it's only 6:00 am and the sun just came up, so they head for the Frosty Mart for early trick-or-treating. There, Lenny closed the mart for paranormal activity, while hunting for monsters. He tells the boys that the Frosty Mart is having an annual promotion for Frosty Screamy Scream, a treat with monsters in it, and Boog let one out of its display case. Fanboy and Chum Chum ignore that warning while collecting candy from the shelves, and wind up getting a Frosty Screamy Scream themselves, so they head for Oz Comix. Before leaving, they tell Lenny they'll come back later.

At Oz Comix, Oz finds them and wonders if anyone followed them, and invites them in for cereal. The boys ask Oz if he has candy, but he doesn't. He used it all to build a candy ark, based on a vision he had last night. Just as they were about to play with it, Oz stops them and tells them it wasn't finished yet. He then says he can't help them, and the best place to get candy is at the strange, jack o' lantern shaped house on an apartment building across the street. But just as he was about to give a warning, the boys go there, anyway.


Meanwhile, at the jack o' lantern house, Fanboy rings the doorbell for whoever is there. The "person" turned out to be a pumpkin-headed man named Mr. Trick, who scares them. After the boys started screaming, Mr. Trick realized he had the wrong face, and switches from his angry face to his good one. The boys stop screaming, and Mr. Trick greets them. He invites them inside. It was amazing! The floors were made out of genuine pumpkin guts, and the walls taste like Thanksgiving. Later on, Mr. Trick says they like candy, and he is the "candyman" type of guy. After he shows the boys all the candy they could eat, they were in candy heaven.

After singing C-A-N-D-Y, Fanboy and Chum Chum get so full, they can't have another bite. But Mr. Trick thinks they are still hungry, and offers them a special treat: a gumball that steals taste. At first, they reject, but they taste it anyway. Suddenly, their taste senses (represented by strips of colored fog) fly out of their mouthes and into a jar Mr. Trick was holding. The boys then learn their taste senses are gone! Fanboy tastes a lollipop, no taste. Chum Chum tastes a chocolate bar: nope. Fanboy tastes a toilet: well, he can taste that. So, they only can't taste candy. Horrified that they'll never taste candy again, the boys cry out in despair as the first part ends.

After the narrator introduces the second half, Fanboy and Chum Chum blame Mr. Trick for taking their taste and that they'll never taste candy again. They then learn that Mr. Trick cannot tell the difference between tricks and treats, and wanted kids to play underwear jokes (which Fanboy and Chum Chum have plenty of). He then tells the boys in order they get their taste back, they must bring him 1,000 screams in a jar before the sun sets. But Fanboy breaks the jar, so they use a cooler instead. After leaving, the Chum Chum thinks they'll never get the screams before sunset. Fanboy tries hard to think of something, and Chum Chum suggests a haunted house. Fanboy thinks that's a great idea, and the boys go off to see the man who helps out with things haunted: Kyle!


Meanwhile, at Kyle's house, Kyle was reading a book on horrible creatures when Fanboy and Chum Chum barge in. They tell Kyle they're making a haunted house, and are using spaghetti for worms and grapes for eyeballs. Kyle disapproves, and says the only thing they'll get are cries of boredom. Fanboy thinks Kyle has a better idea, than theirs, and as a matter of fact, he does!

He invites the other kids over, and they all sit at a table together. After a breif introduction from Necronomicon, Kyle appears and everyone joins hands with him. Before Fanboy joined hands, he wondered what to do with the spaghetti and grapes, while Kyle tells him to forget it. He then tries to summon a spirit, while Fanboy tells him to hurry up. So, Kyle summons a strange creature, called a bailhok, from the center of the table, causing everyone to scream. But Fanboy and Chum Chum scream at the bailhok too, and their screams loved it. Kyle says he can't summon the bailhok forever, and the screams tell him they're on it. The screams then try to open the cooler, but they can't. As a result, Kyle runs out of summon energy, causing the bailhok to disappear and the screams to return to their bodies. Everyone, however, liked the bailhok, and they leave. Fanboy then tells the boys about Mr. Trick before they leave, too. Kyle, however, knows what they're doing, betting he can be better than Mr. Trick, and he follows them.

Back at Mr. Trick's house, they bring the cooler back to Mr. Trick, but they put a slice of turkey in there, instead. Mr. Trick was outraged, until Kyle appears behind them. Kyle demands the pumpkin monster give the boys back, or he'll feel his wrath. Chum Chum warns Kyle that he made Mr. Trick more angry. Kyle asks if that was his angry face he's looking at, but it wasn't So, Fanboy switches Mr. Trick to his angry face, which causes Kyle to scream 1,000 times, helping Fanboy and Chum Chum. Mr. Trick thanks them, and gives them back their taste. The boys were thrilled-until learning it was all just a scam so Mr. Trick can destroy every treat in the world!


Mr. Trick uses the screams to summon a vortex, which sucks in everyone's candy. The boys blame Kyle, telling him this was his fault, and kick him out. The vortex grows big and begins sucking in the candy. After Fanboy learns that no one can taste candy as well as him, he gets back at Mr. Trick by forcing him to absorb their taste senses. Mr. Trick then wants to eat the candy. This causes both of his faces-good and scary-to be friendly! While this happens, Necronomicon quotes, "And what happened next, a miriacle they say, Mr. Trick's pumpkin head grew 2 smiles that day!"

The new Mr. Trick thanks Fanboy and Chum Chum for putting a smile on both his faces. He wonders how he'll thank him, and Fanboy tells him to quit hogging over taste for starters. Mr. Trick gives each of the boys a gumball and when they eat that, their taste senses are back! But then, Mr. Trick is upset that the candy is going down the hole. Suddenly, Oz comes in on his finished candy ark, and plugs up the hole. He tells the boys he finally collected two of every candy. Fanboy then notices the candy ark is rumbling, and Mr. Trick says it's going to blow. The candy ark then bursts apart, creating a gyser that rains candy!

Everyone has their candy back and Halloween is saved. After the boys walk out, Oz is upset that his candy ark is ruined. Fanboy tells Oz to cheer up, as he saved Halloween. Mr. Trick then offers the boys some candy, and the boys each have one and when they smile, their teeth turn pink-fun! Mr. Trick then quotes, "They don't call me Mr. Trick for nothing" and the episode ends.

For a full transcript of There Will Be Shrieks, click here. 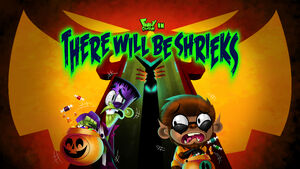 The following is a sortable chart of costumes the characters wear as they appear in the episode, by time of first appearance. Times are approximate.

Kyle doesn't wear a costume despite appearing in a lot of the second part. In addition, Hank and Fankylechum weren't costumed either, although Hank was seen in his PJ's at the beginning of the episode. Fanboy and Chum Chum also wore their costumes in the "Kyle Gets Spooked" Halloween short.

Retrieved from "https://fbandcc.fandom.com/wiki/There_Will_Be_Shrieks?oldid=55125"
Community content is available under CC-BY-SA unless otherwise noted.